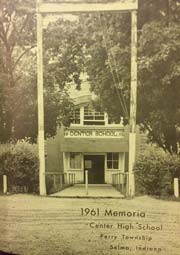 Center School was established in 1905 and located in Perry Township, Delaware County, Indiana. The school was typical of Indiana’s small rural schools in that period. Beginning in the 1900s and continuing through the 1960s, Indiana’s rural educational landscape became filled with the State’s first “consolidated” schools. These schools were the bridge between the pre-twentieth century one-room schoolhouses and the modern schools of today. Center School’s enrollment, like most rural schools, was low. Its curriculum was limited to the basics of education.

The history of education in Delaware County is intricately tied to Center School. In 1827 the county’s first school, a one-room school structure, was built in Perry Township in the southeastern corner of the county. The school was located about three miles northwest of where Center School would be located. By 1905 there were ninety-eight school buildings in Delaware County serving some 5,500 students, and Perry Township had four such schools serving approximately 200 students. One of those schools was located at the crossroads near the geographical center of Perry Township. Shortly after the turn of the century, property directly across from this school was purchased with the intent to construct a new, more modern school building for Perry Township. Although the construction of the school is not believed to have started until 1906, the founding of Center School dates back to 1905.

After its construction, Center School took in and consolidated the outlying one-room schoolhouses. In 1908 the first set of students matriculated from the new school. By 1912, the school saw the first class of students to complete a full twelve years of education at its facility. In 1926, the school was enlarged adding a gymnasium with a stage, an assembly hall, a cafeteria and additional classrooms for high school students. The school, which at that time served all grades from 1st through 12th soon, came to be known as Center High School.

When school consolidations began again in the 1950s, Delaware County, not including Muncie City schools, had eleven high schools. When the consolidations ended in the late 1960s Center School was one of its many victims. At the end of the 1967 school year Center School was permanently closed and its remaining students were bused to the newer consolidated school sites in the area. Shortly thereafter, the school building was torn down and the property sold.

Originally, there was another school that was built in 1899, that was located where the present day Selma Lions Building is today. Bertha Orr attended the Selma school and was the only graduate in the first year of 1899.  Bertha went on to marry Lemuel Arthur (L.A.) Pittenger who became President of Muncie Normal School (BSU). 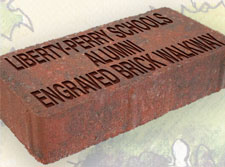